Alexis Selzler About The Author 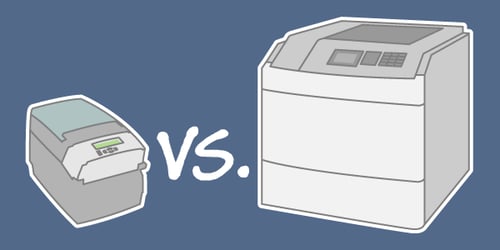 After a patient leaves your pharmacy, prescriptions in hand, what is your core means of communication with them? If you guessed the pharmacy prescription label, you must’ve read the title of this article.

The label tells the patient how much medication to take, when to take it, any warnings or suggestions for medications, how much of the prescription they have and how may refills they have left. When you think about it in these terms, the prescription label communicates a lot of vital information to your customer.

Before we compare thermal and laser printers and how they affect pharmacy label printing, let’s quickly review the history of how we arrived at this decision.

Over many years the pharmacy prescription labels evolved, starting out as handwritten. Then, they moved to using the typewriter, an upgrade in which the patient was assured legibility. Later, with the use computers in the pharmacy, came the dot matrix printed label that was sure to smudge if not covered entirely in tape.

Now, the laser printer and the thermal printer rule the pharmacy label printer market. The laser printer came first and dominated the market. For many years, it was the only way to go. Then, came the first thermal printer. It used a transfer system with a ribbon. While capable of printing without toner, it didn’t really do much for the needs of the average pharmacist. However, without the need for a ribbon, the development of the direct thermal printer can be seen as a huge advancement for the pharmacy industry.

Now the debate for many pharmacists is whether they should invest in the thermal printer or stick with their trusted laser printer.

Let’s see how a Cognitive thermal printer and Lexmark two-drawer laser printer stack up against each other.

A thermal printer takes up a third of the counter space of a laser printer. When using a single laser printer for all of your pharmacy’s printing needs, the printer will have to be on one of the counters, likely near the input station. This takes up valuable real estate near the front of your work space and forces you to keep track of all of the prescription documents through the entire dispensation.

Because a thermal printer is so much smaller than a laser printer and requires so many fewer elements to print, it uses half the energy required for a laser printer. With less electricity being consumed you will reduce your energy footprint along with lowering the stress of your electrical system wiring in your building.

A thermal printer imbeds on the media instead of printing with ink or heating and hardening toner on the labels, eliminating the need for these elements. Instead, all you need for thermal printing are rolls of label paper, which are easy to load and store due their compact nature.

Thermal: A Cognitive thermal printer along with a small Lexmark printer, for monographs, reports and other office tasks, costs around $1,200.

Laser: A two-drawer Lexmark printer, which is needed to load plain paper and label paper, costs around $1,250.

The up-front prices of the printers are comparable.  However, the cost for a laser printer is slightly higher, and over time you’ll end up paying more for wasted and used supplies and energy costs when using a laser printer for all of your needs than for a thermal printer.

The thermal printer boasts many advantages over the laser printer for pharmacy label printing. It’s a third of the size, uses half the energy, requires minimal supplies, wastes less paper and jams less. However, it is not all encompassing. There are some things that are more efficiently done on a laser printer, such as printing reports and office tasks.

If you’d like to learn more about how using a thermal label printer can increase the efficiency of your pharmacy’s workflow, check out this white paper, Pharmacy Workflow: Printer Placement!